Since purchasing West End Yoga in July 2020, longtime yogini Jessica Rodriguez has expanded programming while supporting Lancaster’s yoga community beyond the studio walls. Through collaborations with area businesses and events such as Beer Garden Yoga and Yoga In the Vineyards, she is making yoga approachable for all.
Rodriguez was first introduced to yoga a decade ago when her aunt invited her to join a class. “Yoga changed my life so much. After experiencing the spiritual and mental benefits, I wanted to give a little sliver of what I experienced to anybody I could. I’m passionate about helping other people be their best selves.”
After the birth of her second child, she took yoga teacher training at West End Yoga, where she was a regular student. After completing that, she became the full-time membership and fitness director at a large organization with programs dedicated to physical, mental and spiritual health while also teaching at West End Yoga.
“And then COVID came,” Rodriguez reflects. “My organization temporarily closed, and I was devastated. The job was a part of my identity. The reason I get up every morning it to help people feel their best.” Soon afterward, she received an email that West End Yoga was closing permanently. “My heart sank for all the people in my studio. I could only imagine how many people would be affected."
After just two minutes of contemplation, Rodriguez replied to the email and asked if then-owner Jonina Turzi would sell the business. With a bachelor’s degree in business and experience in management, Rodriguez just wanted to keep the studio open. By the end of July 2020, she was the owner of West End Yoga.
Supporting Teachers and Growing a Community Presence
Rodriguez immediately made operations more efficient. She had a brand-new website created, upgraded the software, created an onboarding program, expanded the membership program and developed a loyalty perks program.
One of the biggest changes Rodriguez made since taking over is an emphasis on engaging the community. She has partnered with many nonprofits in the area for fundraising events and collaborated with local businesses by soliciting modest discounts or free goods in exchange for promotion on West End Yoga’s website.
In an effort to reach people intimidated by yoga, Rodriguez launched a series of off-site events such as Neida! Yoga in the Vineyards, at Nissley Vineyards, an informal yoga class followed by a glass of wine, Sunset Yoga, an outdoor yoga flow class with accompaniment by a live harpist, Beer Garden Yoga and Fourth Friday Men’s Group, with a sliding scale fee.
Rodriguez has maintained the full class schedule with an array of styles such as vinyasa yoga, vinyasa flow, lunar flow and yoga foundations. Yoga therapy is led by a certified yoga therapist trained to help with physical injuries or emotional issues such as post-traumatic stress disorder. The Great Yoga Wall has support slings to help decompress the spine or be used as a prop to achieve more difficult poses. With such a broad array of classes, Rodriguez supports her teachers in any way she can. “Without our instructors, and them being supported, they’re not able to open their hearts fully to the studio.”
The studio membership program offers unlimited classes. Rodriguez intends to add another membership option with a limited number of classes that is more affordable for those with limited incomes. Another membership program includes two virtual classes per month, along with bring-a-friend classes. Yogis can also choose from drop-in single classes or purchase a 10-class card. There are also pay-what-you-can classes. Classes held at or before 7 a.m., or at or after 7 p.m., are $9. 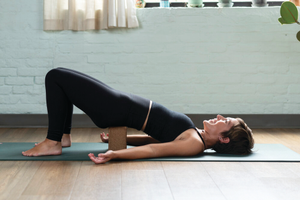 Rodriguez credits the diversity of the classes and the instructors for making West End Yoga an open, safe and inclusive place. She still does not take a salary and works a full-time job outside of the studio. Although her goal was just to keep West End Yoga open, Rodriguez and her team have grown it into much more. “I have been so surprised by the gratitude in this community. Some teachers have taught for free, just to help with sustainability,” she says. “I’m an awe of the beauty of people.”