Not in My Yard To celebrate Earth Day on the heels of the newly published 3,675-page UN ICC Intergovernmental Panel on Climate Change 2022, we present an impassioned essay by Doug Tallamy, the T. A. Baker professor of agriculture in the department of entomology and wildlife ecology at the University of Delaware, who has authored 106 research publications and taught insect-related courses for 41 years. His books include Bringing Nature Home Press in 2007, The Living Landscape, with Rick Darke, in 2014, New York Times bestseller Nature's Best Hope, in 2020, and The Nature of Oaks in 2021, the same year he cofounded Homegrown National Park with Michelle Alfandari. Tallamy has been awarded recognition by The Garden Writer’s Association, Audubon, The National Wildlife Federation, The Garden Club of America and The American Horticultural Association.
Recently, the World Wildlife Fund (WWF) reported that since 1970, Planet Earth has lost two-thirds of its wildlife. This jaw-dropping news joins a litany of other recent reports about our steady march toward the sixth great extinction event on our home, Planet Earth: from the global decline of insects to the loss of 3 billion North American birds in the last 50 years to the failure of the 150-nation global biodiversity initiative to meet any of its 10-year goals, and finally to the United Nations prediction that 1 million species will go extinct in the next 20 years. You could hardly be blamed for concluding that the demise of our fellow Earthlings is inevitable. But to that I exclaim, “Not in my yard!” 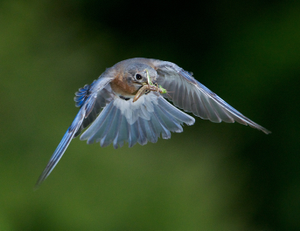 Mention “wildlife”, and most people conjure up images of charismatic megafauna like lions and tigers and bears (oh my!); camels, rhinos and eagles; wolverines, jaguars, and Burmese pythons. Yet wildlife is far more than the few large mammal species that adorned our childhood picture books. The vast majority of Earth’s animal species are insects and other invertebrates, as well as the insectivores, like birds, salamanders, foxes, possums, racoons, rodents, spiders and lizards that eat them, and we humans will not survive long on this planet without these tiny creatures. As the late E.O. Wilson famously explained long ago: insects are the little things that run the world. Without insect pollinators, 80 percent of all plants, and 90 percent of all flowering plants, would disappear, as would the food webs that support mammals, reptiles, amphibians, birds and freshwater fishes. What’s more, the Earth would rot, as bacteria and fungi replace insect decomposers that rapidly recycle nutrients. Wilson’s message was clear: there will be no lions, tigers or bears; birds, bats, bunnies or other animals or even humans in a world without insects.

Despite Wilson’s warnings, we have waged war on many insects and ignored the basic needs of the rest for so long that now most insects are in trouble. By one measure, the little things that support our world have declined globally by 45 percent! Insects are not the only important forms of wildlife, but nearly all of the more charismatic species depend on them. The simple truth is, we cannot reverse wildlife losses without reversing insect declines. 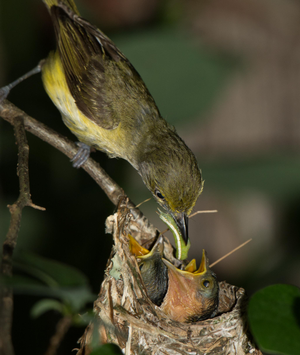 For the past four years I have been photographing the moth species that live on our property (I haven’t gotten to the butterflies yet). This year, I reached 1,140 species. That’s right: at least 1,140 (and counting) moth species make their living on our 10-acre patch of southeastern Pennsylvania. That is 44 percent of all of the moth species that have been recorded in the 2.4 million acres that comprise Pennsylvania; 44 percent on just 1/240,000th of the land area! And because many of those moths and the caterpillars they developed from are essential bird food, 60 species of birds have been able to breed on our property: a full 38 percent of all the terrestrial birds that breed in Pennsylvania. And who knows how many additional bird species have used our land as a refueling site during fall and spring migration?

Our property is not a preserve that has been protected for a century. Just the opposite. Not long ago, it was part of a small farm whose successive owners had worked the land hard for 300 years. Before we moved in, the vegetation was a tangle of invasive Asian plants that the owners had mowed and called ‘hay’. Very few trees and native shrubs grew here, and most of the resident birds were introduced starlings and house sparrows that could thrive on exhausted farmland. The caterpillars that sustain 96 percent of North American terrestrial bird species were largely absent.
But today, rather than having lost two-thirds of its wildlife as WWF suggests, our 10 acres has increased the number of its resident species by at least that much. And it did not take decades for those increases to occur. The depleted agricultural wasteland of two decades ago has become a hotspot for local wildlife. How did this happen? 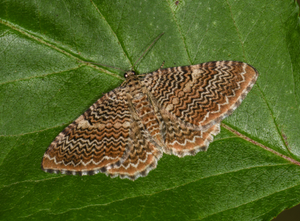 The seemingly astounding rebound in species on our property was actually neither astounding nor accidental. It was a predictable response by the natural world to our purposeful restoration of nature’s foundation: native plants. The moths I am counting have returned because the native plants they require are now here, as well. And those plants are thriving on our property because along with the wind and the local blue jays, we have planted them. We also have removed the tangle of Asian invasive species so that our native plants have enough space, light and water to grow.

The birds and other vertebrates that live on our land can do so not just because of the moths our plants produce, but also because of the fruits and nuts our oaks, black walnuts, hickories, filberts, blackberries, serviceberries, dogwoods, persimmons, black cherries, pawpaws, chokeberries, viburnums and black gums make each year. Winter birds like juncos and white-throated sparrows migrate to our yard because of the copious amounts of seeds produced by our native grasses, sweetgums, sycamores, evening primroses, asters, wild lettuce, black-eyed Susans, and goldenrods. Red-shouldered hawks, Cooper’s hawks, and sharp-shinned hawks regularly hunt here because their prey is so abundant. And it is hard to walk anywhere in the spring and summer without encountering the cutest little gray tree frogs imaginable.
We have planted native plants because 90 percent of the caterpillar species that transfer more of the sun’s energy from plants to other animals than any other plant-eaters are unable to develop on non-native plants—those Asian ornamentals we habitually decorate our yards with. Most insects can only use plants after they have evolved adaptations that counter the chemical and physical defenses of those plants. Such adaptations take eons to appear, eliminating the chance that decorative plants from other continents can serve as viable host plants for most of our insects. Those plants simply have not been here nearly long enough for North American insects to adapt to them, even though many have been here hundreds of years. When we allow non-native plants to replace native plant communities, either as well-behaved ornamentals or invasive species that ecologically castrate local ecosystems, caterpillar populations decline by up to 96 percent.
Will our 10-acre restoration alone be able to reverse global declines in wildlife? Of course not, but if ecologically appropriate plant choices were consistently made by homeowners, land managers and municipalities everywhere, the habitat value of all non-agricultural land would be measurably enhanced, just as it has been on our property in Pennsylvania. Most ag lands can be improved as well by liberal use of pollinator strips and hedgerows rich in native plant species. Aided by groups like the National Wildlife Federation, National Audubon, Wild Ones, Grow Native, the Wild Seed project, the Missouri Prairie Foundation and the California and Florida Native Plant Societies, such transformations are well underway across the country, and just as on our property, the results are beginning to defy global wildlife trends.
Returning native plants to our landscapes provides essential energy for species-rich food webs on any scale, be it 10-acre parcels like ours in Pennsylvania, half-acre suburban lots like Margy and Dan Terpstra’s, near St Louis (Tinyurl.com/HummerHaven), one-tenth-acre city lots like Pam Karlson’s, in Chicago (Tinyurl.com/Bio-FriendlyGardens), or even the three-foot-wide strip of nature along Manhattan’s High Line (Tinyurl.com/WildBeesOnHighLine).
The loss of biodiversity is a global crisis, but it is a crisis with a grassroots solution. Somewhere along the line, we assigned Earth stewardship to just a few specialists: a handful of ecologists and conservation biologists. The rest of us have had cultural permission to destroy the natural world whenever and wherever we wanted, using oxymoronic words like ‘development’ and ‘progress’ as rationalizations. The United Nations has designated Biosphere Reserves as places of ecological significance, but that language suggests that there are places on Planet Earth with no ecological significance. Not so! Every square inch of the planet has ecological significance, including our yards.
The ecological approach to landscaping that I have described here is nothing more than basic Earth stewardship, but it is stewardship that empowers us all to become forces in conservation. Replace part of your lawn with ecologically powerful native plants; remove those ornamentals that have proven to be invasive; and plant a pollinator garden. Even if you don’t own land, you can make a difference by volunteering to help your local land conservancy manage its properties or simply by helping someone who does own property. Either as property owners or volunteers, each of us has the power—and we clearly have the responsibility—to enhance the ecological value of local landscapes. My yard’s message is loud and clear: most wildlife losses are reversable! Humans can coexist with the natural world, at the same time, in the same place. Whether we decide to do so will determine nature’s fate and ultimately, our own. In that sense, we all are nature’s best hope!
For more information, visit DTallamy.udel.edu.
In-Print, Local Life April 2022